I wrote my first novel as part of NaNoWriMo 2011, a great personal achievement by any measure. Then, I let it sit in the proverbial drawer for the last six years, unreread, unedited, unloved. As much as I loved the act of writing that novel, as much as I loved the energy I felt during those days, that wonderful sense of doing what you know you’re meant to do, I put it all away and haven’t really gone back to it since. I could tell you about all the reasons why that is, but the result remains the same: I made a conscious decision to put creative writing away in favor of other pursuits.

When I first started gaming, it was the collaborative storytelling aspect that most drew me, the chance to make my own stories in magical realms or futuristic spacescapes. I’ve done some gaming during the time I wasn’t writing, trying to scratch that story-building itch, but it wasn’t enough or the same (except for this one Burning Wheel game I played with my friend Judd, which was phenomenal). Then recently, I came across this pic on Facebook. 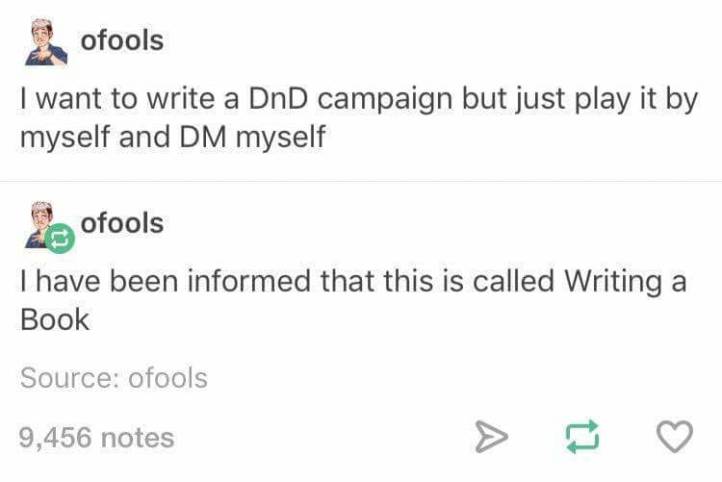 I joked that I had finally realized my mistake, and was now correcting course, which is not so much a joke as it is the truth. While it is fun to collaborate on stories through gaming with friends, it isn’t a substitute for the act of creating new stories that explore the themes that I want to explore. It’s been unfair of me to expect roleplaying games to fill that void inside me that only writing can.

One of the big changes I’m making for 2018 is making a conscious and deliberate effort to write again, starting with editing and finally releasing my novel. I have notes for short stories I’d like to write as well, and I may go back and revise some of my better older stories. Getting back to writing is the main goal here, with publishing a distant second.

Except for the novel; that baby will get released for sure at some point this year (or early next at the latest).